If you follow my blog for longer period of time (and by the way, I just realized I missed my 5th blogversary), you know I write about my mother in law.
I write so much about her and her behaviour, that maybe I should change the name of this blog to “My Hong Kong husband and my Shanghainese Momzilla-in-law”.

Without her I think my page would be pretty boring, she can be very entertaining to a third party – not so fun if you need to live with her for an extended period of time. And by extended, I mean more than a month.

Sing and I are married for nearly six years now, and in meantime my relationships with Momzilla was like a rollercoaster. From loving the new girlfriend/fiance of Little Treasure, to hating his newly married wife, to loving a future mother of Little Treasure Junior.
There were few more rides in meantime, but in general you could draw our relationship in a mini-sinusoidal graph.

You can read that I quite often complain about my mother in law. I bet she complains equally about me to her friends, that I think she photoshopped in her pictures. But in the end she’s mother of my husband and my family, even if I get angry at her I need to remember I can’t just cut her off and the issues have to be resolved between us.

Currently you could describe the emotions between us as “I’m going to love and care the shit out of you”. I can write a 13 page long

essay why I don’t want to live with her, but if I hear someone does something bad to her, or if she needs help I will do everything in my power to help her. And vice versa.

But honestly, it wasn’t always this way.

There were moments I was nearly hating her – maybe due to my immaturity, maybe she was to blame it or maybe it was just a misunderstanding.
I nearly hated her for yelling at me and making me cry during my own wedding day, when she perfectly knew she was the only mother figure that could be there.
I nearly hated her for bashing on me every single day – eating, not eating, being fat, being skinny, not having a baby.
I nearly hated her when she even started to complain about my dad’s health and what’s the point of marrying someone whose family dies young. Yes, that was her concern as well.

There were so many situations that drove me mad and made me question my marriage with Sing. Would it be easier for both of us just divorce?

Then, whenever Sing and I would argue about the whole situation she would come to the room and try to calm both of us down. She didn’t take Sing’s side, nor mine. She just wanted us to get over whatever we argue about and be together.

Over the years, I realized I cannot be selfish and have Sing just for myself.

As cheesy as it sounds, he loves me so madly, he often would choose my wish, over hers – even if I didn’t really need it and could compromise.
He was (and still is, I’m not even going to deny that) very spoiled by her, and I think over the years he took that love for granted. He would help her financially, but he got used to being served, not serving her.

I always prepared her hot water in the morning, when I was waking up to feed Biscuit the meowing asshole seeing sunshine at 5AM and thinking it’s feeding time.
I would choose food more suitable for her, even if I’m not fond of it myself as she already eats very little.
I would get her an extra jacket going out, because I know she would eventually start shivering as a result of Irish weather.
And that’s the same thing I tried to show to my husband: be considered, show her that just because I’m there, it doesn’t mean she doesn’t matter anymore. Tell her I’m not a threat, but just an extension to the family, I won’t backstab her and steal you away. I will even 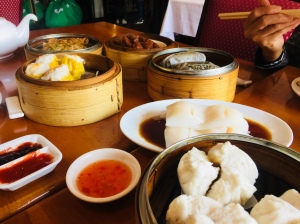 I won’t lie: Momzilla and I still disagree, quite often to be honest. We fight through Sing-translator, we have moments of

awkward silence, but can you believe that for the very first time I got a real hug from her?
Not that sloppy-hand pat on the back, but she actually hugged me really tight and said she can’t wait for us to move back to Hong Kong.

It was one of these moments, when I thought these three months weren’t that bad after all.
Although there’s nothing better to finally rest on the couch in a lazy-cat position and don’t worry someone will judge you and complain to your husband you don’t sit like a lady. Don’t let anyone else tell you otherwise.

mother in law and daughter in law will always have a rocky relationship. Thanks to that at least I will have something to write about it! But we are an example, that if both of you want to work together, you can eventually start genuinely like each other, rather than feel being forced into any relation with another person.

So to summarize this: could it be that the root cause of all the problems between me and Momzilla was Sing all along?
Maybe if he wasn’t there, me and Momz would be BFFs?

Who knows! We can’t get rid of Sing, so we need to get used to each other and learn how to live together, for everyone’s sake.

How’s your relationship with your in-laws? Did it improve over the years? How you made this relationship work? Let us know, we’re so curious to read it!

16 thoughts on “奶奶和我的關係 – my relationship with Momzilla”