I’m a huge fan of ‘Old Master Q’ comics. We own several of them, including those big ones containing whole year of

comics. I love it so much, I even shared my love with you guys by making the comic book series a part of my recent giveaway. And when Sing read some news site saying there is 老夫子 cafe opened, I told Sing this is the first thing we’re going to do in Hong Kong. So we did.

It broke my heart to heart that the author of the ‘first generation’ Old Master Q, Alfonso Wong, passed away just at the beginning of this year. May he rest in peace.

Knowing that, I thought I can’t wait any longer and this is the latest time I should be posting our video from the cafe and the review itself!

The series is about Old Master Q, an elderly man dressed in a  traditional Chinese attire along with Big Potato, Mr. Chin, Mr. Chiu and Miss Chan, who are all represented in more modern, progressive attires. The overall

theme of the comics centers around humour, with characters usually portrayed in a variety of social statuses, professions and time periods which allows for a wide variety of scenarios to explore. And the best thing is, even if you don’t speak Cantonese, you may be able to laugh.
You can check this site for more comics: http://www.oldmasterq.com/

And now when you joined the Old Master Q fan club, I can introduce you to OMQ dinning room, located at 1/F, 777 Nathan Road, Prince Edward.

As we were not familiar with the area, it took us a while to find it, but a statue of the Old Master greeted us from far away and we knew we’re heading into the right direction. I couldn’t resist and I had to take a photo of Sing with his master.

You can see how much effort was put into this restaurant. The owner contacted the eldest son of Alfonso Wong to get his approval regarding the decor, food, location, style etc. You get ‘hit’ with OMQ even before entering the building.

I fell in love with that place the moment I step in. Stained glass with covers of the comic books. Big Potato and his flower statue. Even the doors with warning had a comic-relation to it.

Inside of the cafe you can sit in few different locations. If you want to sit separately you will be most likely waiting for around 20-30 minutes. I wish we could make it to the car-table you can see in the end of the video, but sadly the aunties who got that spot sit were sitting there prior to our arrival and when we went out, they were still there. I don’t blame them, same would probably happen with us.
Even the chairs have some characters printed on them.

The dining room itself is divided into six themed areas, each featuring different artworks in either monotone, silhouette or pop art designs, but there are photo ops all around.

The menu is amazing. Not only because it contains soups, sandwiches, pastas and baked and grilled proteins, vegetarian section and more of Hongkong-ized Western food, but also it’s in the shape of our dear old Q.
And if you’re so into OMQ you will even notice the name of each dish or drink has a relation to the comic book!

We chose a lunch menu, which is slightly cheaper than the normal menu, however we decided to rob a bank and get some of those fancy drinks.

As a starter, we both chose Hong Kong style borscht with a black bread. I believe it’s coloured with squid. The taste was good, but I think my eyes enjoyed it even more than my stomach!
The soup was brilliant, slightly spicy, sweet, with very rich tomato taste. I never get tired of it. Perfectly balanced very gently taste of the bread. 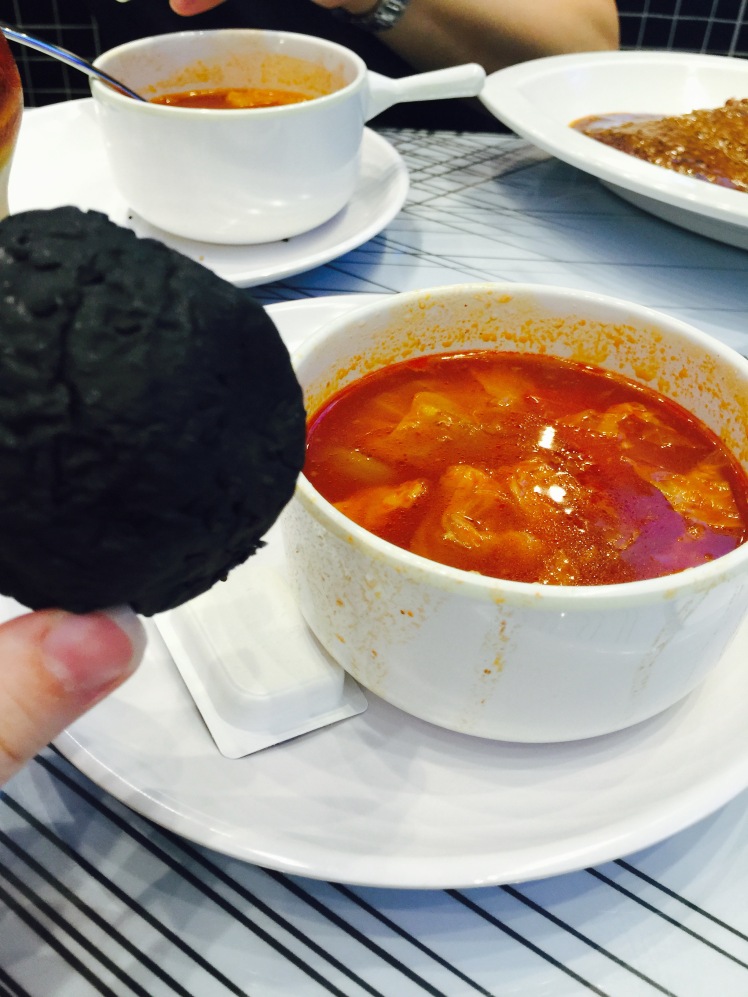 For main meal Sing chose peppered meat with vegetables on a sizzling dish and I had Hong Kong style baked spaghetti.
The portion size was perfect, especially after a starter – made me full, but not to the point I would feel sick. The pasta was made al dente so over the time I was taking pictures and shooting videos, it didn’t get soggy. The mix of sauce and veggies was perfect, slightly sour. Just how I like it. 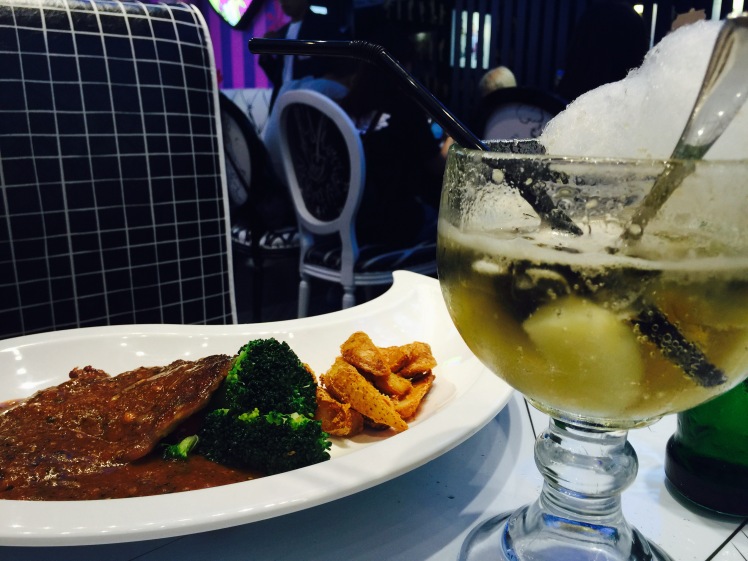 By the way, have you noticed even the cutlery has OMQ logo on it?

For the dessert we had huge waffles with fruits and ice cream, while we tried to finish our drinks. I had classic Hong Kong style lemon tea – and I really appreciate that I was able to add sugar-water to my own tea rather than get 20 spoons of sugar added by whoever made the tea. As much as I love HK lemon tea, if you ever see how it’s made, you will always think twice before drinking as it has SOOOOO much sugar.
Sing on the other hand won the drink-contest. He had a Sprite with tropical fruits and a little cotton candy cloud on the top, that would be melted by Sprite. It looked incredible and tasted pretty good as well! Good that the drink is slightly sour which balanced the sweetness of the cotton candy. 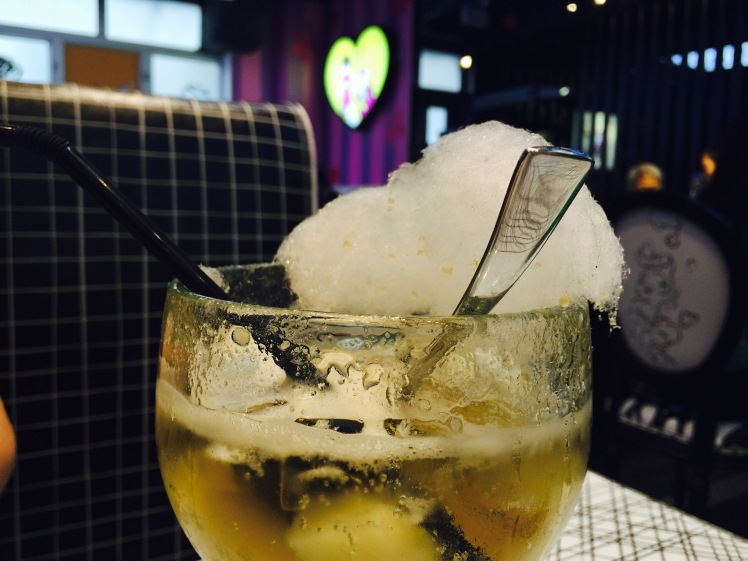 I know there are probably cuter places, but I like that finally Hong Kong did something for with their own local character rather than having another Japanese cutie cafe. It’s funny, smart, satirical place with beautiful decor, delicious food and very special atmosphere. I would totally recommend this place to everyone! 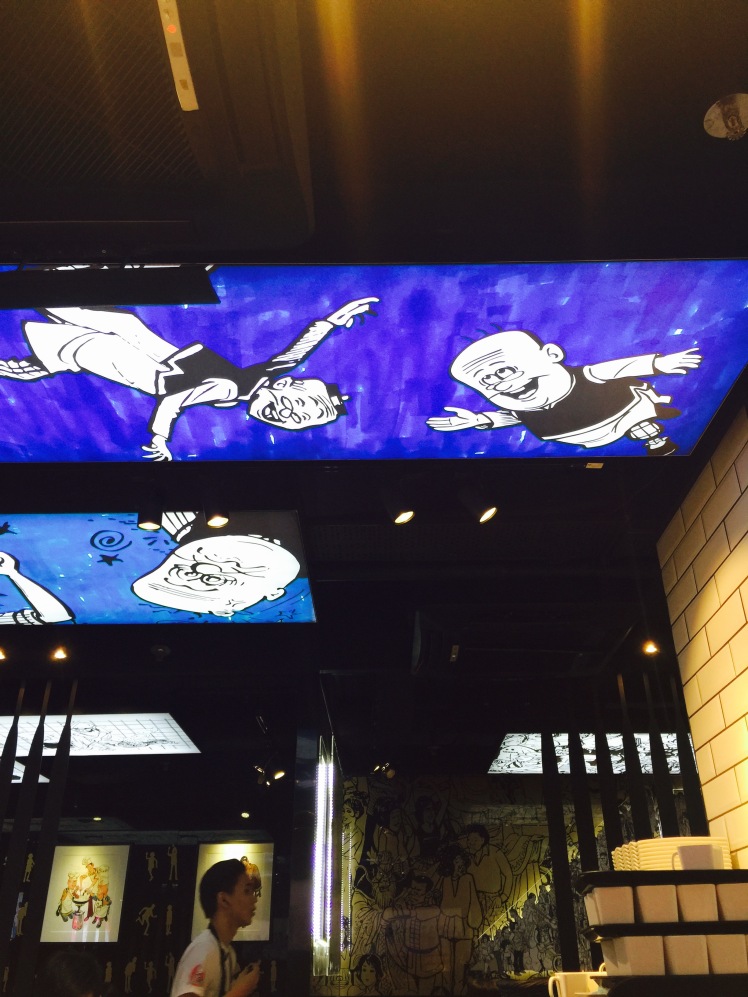 Did you know OMQ before? Do you like themed restaurants? Which one is your favourite? Let us foodies know!