I know we are now still recovering from the New Year’s celebration, but I want to take few steps back and take my

last chance to talk about our Christmas over the years.

We’ve been together for a long while, this year we’re going to be married for five years. Crazy, isn’t it? Feels like yesterday when Momzilla yelled at Sing and me for playing cards instead of getting ready. How foolish she was, she wasted her last chance to stop us. Muahahaha….

Anyway, with the time passing by I realized how our Christmas changed over the years. And here’s a warning for you guys [OLD, BAD PICTURES BELOW. LIKE REALLY BAD].

The only Christmas we spent together as a non-married couple, also our first Christmas not in LDR. We dated, but we weren’t even engaged. We spoke about getting married, yet nothing was moving.

In Poland you don’t usually invite someone for Christmas Eve unless they are at least at ‘fiance’ level so it was unusual for my dad to ask Sing to join us. My dad was OK with me dating him, however never really showed any emotions towards him. I guess he wanted to be a good Christian and make a use of the ’empty plate for lonely person’ tradition. Sing was that lonely person in the hotel room (yup, no man would be allowed to stay overnight unless we are

married). I wasn’t ready, but I was really happy and excited. My mom would talk about herring as ‘Polish sushi’ and everyone smiled.
It was also the first Christmas in many years that we spent with someone else rather than each other. So many good memories, especially when my dad and Sing tried to dress up a Christmas tree and one of the light bulbs was off so the whole chain did not work. They looked like two factory workers.

Fast forward, one year later we were married for nearly half a year. It all went so fast. As some of you know, my

parents couldn’t attend our ceremony in HK due to my dad’s heart problems and we were worried such a long flight could cause more damaged. So until those Christmas, they never really met Momzilla or any other family member. Sadly, Momzilla is like a flu, you don’t get rid of her that easily so she decided to spend more than a month visiting. You know that saying ‘A guest is like a fish, after 3 days begins to smell’? Well, she smells nice, but she can be more than enough to handle.
She stayed with my parents while Sing and I stayed in a rented studio. My parents love her till today, probably because they have no idea what she talks about. There was plenty of food, laugh, we took Momzilla to a midnight mass when she stared at little kids like a creep and my mom stared at people so the

First Christmas with just the two of us. And Biscuit, the asshole cat. We were stuck in America as Sing was still on his student visa/OPT and we were scarred that once we leave the US, we won’t be able to even go back and get our stuff back. My parents understood it, so we just Skyped twice – during their Christmas Eve dinner time and later on during our evening. I didn’t even really have a chance to spend it with Sing as he was working normal hours. I cooked maybe two, three dishes like salad, bigos, herring, and put gifts from myself and my parents under Christmas tree, but it didn’t feel the same.
To be honest, that didn’t even feel like real Christmas to me. It was just like any other day, only with a little Christmas tree.
Sing tried his best to bring me to more festive places, but you probably guessed – it wasn’t the same. Well, if you think that was bad, wait for…

Christmas of 2014 is like year 2016. You don’t talk about it.
I was Eason’s Chan inspiration for ‘Lonely Christmas’ song.

If you don’t know it, just google it. Pretty good one.
It started from a lie – after our lovely trip to Hong Kong I was in such a good mood, that was my first time since 2012, I had lovely time, everything was so big and Christmas-y. I was like a little baby, my eyes were sparkling. Then Sing told me his trip to Ireland to set up the new company (which we currently work at) will last little bit longer than planned two weeks. It was nearly three months.
Company offered to pay for my ticket to Ireland, however we didn’t have anyone to take care of our cat for that time so I had to pass. 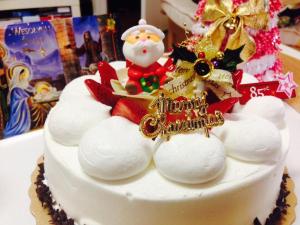 I spent very lonely Christmas, just me and the cat. Even my parents couldn’t celebrate knowing I was alone. Sing at least was invited by the landlord of our factory and enjoyed his time a bit.
For me, I didn’t even bother to cook. And I need to thank you all guys, for all your wishes I got at that time, it kept my spirit up!
The other savior was Sing’s close friend, he took me to fake ‘Cafe de Coral’ – they use same Chinese writing, but the English name is different. Had some nice baked pork chop and later on I got myself huge ass cake I ate on my own. Wasn’t as bad as it could be, thanks to all the kind people, but I still get upset thinking about it.

First one in forever, I was able to spend with my parents. We were quite sad that Momzilla was too cheap and didn’t want us to buy her a ticket from Ireland as she was there with our cat, but at least we all had each other. It wasn’t about the gifts or food, but we were happy just to be together. We even argued in a different way. There was lots of laugh and my mom couldn’t get enough of squeezing Sing like he was a plush toy. It were just few short days as we had to get back for quarter end, but all the happiness we brought back with us lasted until late 2016.

First one I organized for my family. I was so stressed, especially that now I’m about to get promoted to a buyer

(purchasing) as I spend most of the day at work. There was QE right before my parents arrival as well. It was all so crazy, but my parents kept saying ‘Don’t worry, as long as we are together, all the food can be bad’. Luckily, it wasn’t. No one got a diarrhea. Which I consider my personal success. It was way too short, tho. We took my parents around Ireland, that’s why you can see those cheesy pictures on my Instagram.

All those different experiences made me realize few things:

I grew up from a little kid who cared about the gifts the most, to someone who just wants to have everyone she loves around her. It took me so many years, to realize what’s really important. I was a selfish teen who waited just for the gifts and did not appreciate the time with my family.
I hope next Christmas will get even better.

6 thoughts on “那些年的聖誕節 – our Christmas over years”