I’m happy to share a guest post from Yang, the contributor of LearnMandarinNow: ‘A great debate: do I learn Cantonese or shall I try Mandarin Chinese first?’.

I try really hard to learn Cantonese, but not many of you know that I actually started my adventure with so called ‘Chinese’ with Mandarin. Part of it was cause by lack of studying materials in Polish, the other one was little bit of my ignorance – when we started dating I was Jon Snow of Hong Kong culture, I knew nothing. I thought Macau is a card game, but in my defense until last month my almost 29 year old engineer-husband thought brown cows don’t give milk. I guess we all are ignorant at some level.

But once I knew more about Hong Kong, how important part of the local culture is the language my only choice could be studying Cantonese.
It’s not easy to learn, so I don’t expect everyone visiting Hong Kong for a week to speak fluently but I always tell people ‘Say m’goi to your waiter, not xiexie. Instead of ‘ni hao’ say ‘nei hou’.
I learn Cantonese because it’s my husband’s language, it’s part of his heritage. I want him to teach our children Cantonese, especially now when all he can hear around is Mandarin.
I don’t mind if he also teaches our child Mandarin later on, more knowledge never hurt anyone and I wished my parents pushed me more in primary school when it goes to language studying, but in our case it will always be Cantonese that is a priority.
In case you ask why not also Shanghainese since Momzilla is from Shanghai – the anwser is simple: if there’s hell, they probably speak Shangainese there. And I told Sing that if our child’s first words are ‘Va-zyAAAAH’ then I’m taking the child and Biscuit and move back to my parents. Trust me, once you here two elderly ladies talking Shanghainese you will know what I mean.

After all I hardly remember anything from the few chapters of my Mandarin book, to be honest my spoken Shanghainese thanks to Momzilla is much better than my very broken Mandarin, but the moment I switched to Cantonese, at least I had some idea how to learn it by myself from the books and the CDs. But of course I will always encourage everyone to at least give a shot to beautiful Cantonese 🙂

A great debate: do I learn Cantonese or shall I try Mandarin Chinese first?

There seems to be so many people planning to learn Chinese these days.

One early decision you need to make, though, is whether to learn Mandarin Chinese or try your hand at Cantonese.

Why? What’s the difference? Which one is best? How do I get started? are some of the questions which immediately leap to mind!

Well, that’s where at Learn Mandarin Now can help as we always try to guide you towards the best ways of studying Chinese via our research surveys such as “How to learn Chinese, 50 blogger’s top tips”, and interviews with Chinese speaking experts such as “Learning Cantonese: 10 great tips which you really need to know”, plus other informative advice to help you advance your study of Chinese.

However, before we consider the main question further, we’d like to offer our thanks to Paulina from My Hong Kong Husband for, firstly, writing a blog that we always enjoy to read, but also for letting us make this blog post.

So, back to the main question; as a starter, let’s consider:

Aren’t the Chinese characters the same for Cantonese and Mandarin Chinese?

Well, yes and no!

But they’re both written Chinese I hear you say. Well, Yes, that’s true but spoken Cantonese and Mandarin are, in some ways, quite different and can cause misunderstandings even amongst Chinese people—but very similar in others. So No as well.

Confused…? Please don’t be! Let us give you a great example:

The Chinese characters 真心膠 are frequently used in Cantonese slang and are a commonly used expression, especially amongst the younger generation. In fact, 膠can mean many different things in Cantonese, depending upon the context. The phrase is generally taken to mean that something is not so good, not desirable.

However, in Mandarin, the characters in the title don’t mean “T-shirt language failures”, but literally mean “wholehearted glue T-shirt”!

Wholehearted glue t-shirt? What are you talking about?

Clearly it doesn’t really make any sense, so no wonder people get confused. To get a similar meaning in Mandarin might be something like 真心差劲的T恤 or 非常逊的T恤.

So, to summarise, even though it’s the same Chinese characters, the meaning might be totally different for a Mandarin speaker or Cantonese speaker.

Clear now? We hope so!

Right, so, look at some of the other things which may affect your decision to learn Mandarin Chinese or Cantonese:

The Chinese language is, as you would expect, very diverse

If you consider that China is the home to almost one quarter of the world’s population and has a land area of around 9.5 million sq kilometres (ie about 3 times the size of India), it should be no surprise that there are an enormous number of dialects, regional language variations, and accents. Therefore, in an extreme case, some people in the northern areas around, say, Harbin might have difficulty understanding people from the southern areas such as Guangzhou because of the local terms and accents, even though they all speak Mandarin. In fact, there are lots of jokes which have originated from miscommunication between people from different part of China.

To be fair, this issue was more apparent in the past but communications are now much easier as most of the younger generation are being taught “standard Mandarin Chinese” with little or no accents attached.

Cantonese is one of main regional variations of Chinese

Cantonese is well known as the language of Hong Kong and Macau but, in fact, is spoken by an amazingly high 80-100 million people in the Guangzhou (Canton) and Guangxi provincial areas; it is also widely spoken throughout most of the overseas Chinese communities in Europe, Australia, North America and so on.

Now the big question: should I learn Cantonese or Mandarin?

Firstly, Cantonese: well, if you are living and/or working in Hong Kong, Macau or Guangzhou or are like Paulina, and married to Hong Kong person, then learning Cantonese might seem a better choice.

Although most Hong Kong people can speak English, if you are a foreigner in Hong Kong and can actually speak some Cantonese with local Hong Kong people, you will really “wow” them and may be pleasantly surprised by their positive reaction—given that many locals think that Cantonese is an almost impossible language for foreigners to learn.

In fact, you might also wonder: Should I just learn Mandarin anyway as, presumably, most Hong Kong people can speak Mandarin as well as Cantonese?

Well, over the last 10-15 years many more Hong Kong people have learnt to speak Mandarin, especially those in the service industry or business men travelling frequently to Mainland China. However, whilst you can’t expect to have a deep conversation or communication with Hong Kong locals in Mandarin, as speaking fluent Mandarin still a bit of a challenge for them, many of the younger generation will be able to give you some help in Mandarin if, for example, you are asking for directions to places such as Lan Kwai Fong, Harbour City etc.

Still, learning Cantonese is well worthwhile for a variety of other reasons.

Well, you may know that parts of Hong Kong culture, such as its TV shows, films and music, were extremely popular in the 80s and 90s all over China and around the world in overseas Chinese communities. Accordingly, many people, both foreigners and mainland Chinese, decided to learn some basic Cantonese be able to, for example, watch some early Jacky Chan and other Hong Kong comedies or action films—or even sing along with the songs of Beyond (one of Hong Kong’s famous bands).

This still happens these days, although to a lesser extent, and maybe people like Paulina, who might really enjoy Hong Kong culture and entertainment, will watch some of the famous comedies by Stephen Chow(周星馳), or enjoy Dayo Wong’s(黃子華)stand up comedy talk show in Cantonese—mainly as, sometimes, the Mandarin version or one with English subtitles doesn’t quite translate so well and much of the humour may be lost. 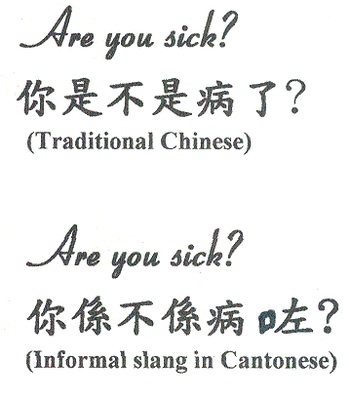 The same issue with translation can apply on the other hand where, for example, mainland comedy stars such as Zhao Ben Shan(赵本山) or Xiao Shen Yang(小沈阳)are very popular in the northern part in China but, if the shows are translated into Cantonese, they lose something in the translation and become not that interesting.

If you are planning to live and work in mainland China, say in Shanghai, obviously, Mandarin would seem to be a better choice although, of course, nobody will expect you to speak the local Shanghai dialect, and “regular” Mandarin will be good enough for work, business, or making local friends.

On balance, the vast majority of people do tend to choose to learn Mandarin Chinese and this may simply be due to the fact that more learning materials are available or that there are more people to teach you! J

Even though they may not be Chinese teachers, some of your Chinese friends who have been to college, and have learnt “proper Mandarin”, may be able to teach you Mandarin step by step through Pinyin, Chinese Characters, Chengyu etc.

Conversely, except for professional Cantonese teachers, most Cantonese speakers probably never actually learnt Cantonese at school but have just naturally picked it up from parents, friends or the TV. Therefore, such speakers might be able to teach you some useful phrases, but will possibly struggle to teach you Cantonese pinyin or explain the grammar systematically; this is probably the same for people who speak Hakka or Min Nan Yu who learn mainly by listening.

The choice is yours

At the end of the day, the choice is yours, and depends primarily on your motivations and purposes to learn such new language.

So, have a careful think before you decide… but, in any event, keep reading our blog posts at Learn Mandarin Now as we always offer great and advice on the Chinese language as a whole—as we said, we’re here to help!

Having read this article, what do you think? Would you choose to learn Mandarin or Cantonese first? Why not let us or Paulina know your thoughts, as we’d love to hear your opinion?
(From Lina: PICK CANTONESE! :D)