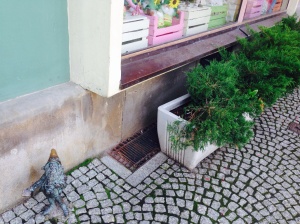 I think most of the people would be now like ‘What the hell, are people from Wroclaw a half-size of average Polish person? Why would you choose a gnome?’.

First of all, those are dwarfs, not gnomes – tourist information says that so it has to be true. I’m looking at you, Linda and Paul. Second of all – I’ve done some research, to be honest I was clueless like most of you. Too shameful since I call that place my home and I only thought it’s just a part of promoting the city, but I’m happy to now share my knowledge with you, especially during such a difficult time to my fellow Hongkongers.

Originally they were actually paintings on the walls in the biggest cities of Poland since anticommunist watchwords were covered by the communist governent of Poland – over 1000 dwarfs were painted in 6 cities. The first graffiti was painted by  Waldemar Fydrych and Wiesław Cupała on the night from the 30 to 31 August 1982 on one of the residences in the Wrocław district of Biskupin and Sępolno. 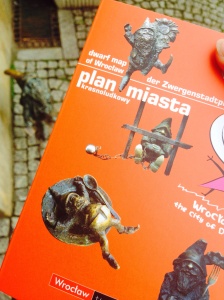 It was a part of Orange Alternative (in Polish ‘Pomarańczowa alternatywa) – an underground protest movement which was started in Wrocław,in the 1980s. Its main purpose was to offer a wider group of citizens an alternative way of opposition against the authoritarian communist regime by means of a peaceful protest that used absurd and nonsensical elements.

By doing this, Orange Alternative participants could not be arrested by the police for opposition to the regime without the authorities becoming a laughing stock. Orange Alternative has been viewed as part of the broader Solidarity movement. Academics Dennis Bos and Marjolein ‘t Hart have asserted it was the most effective of all Solidarity’s factions in bringing about the movement’s success.

In 2001, to commemorate the Orange Alternative movement, a figurine of a dwarf (the

movement’s symbol) was officially placed on Świdnicka Street, where the group’s happenings used to take place. It is probably one of the few cases in the world where such a subversive group has been honoured by the city authorities, who commissioned the placing of a statue of a dwarf in the city centre.

The figures of the dwarfs, which are smaller than the Orange Alternative monument on Świdnicka Street, were placed in different parts of the city. The first five: designed by Tomasz Moczek, a graduate of The Academy of Art and Design in Wrocław, were placed in August 2005. These were the Fencer near the University of Wrocław, the Butcher in Stare Jatki arcade, two Sisyphuses on Świdnicka Street and the Odra-Washer-Dwarf, near Piaskowy Bridge. The name of the last dwarf is related to Pracze Odrzańskie: an estate on the outskirts of the city. Since that time, the number of figures has continued growing, predominantly in the Old Town and today we have more than 300 of them.

Knowing all of that I can say that dwarfs are not only symbol of Wrocław, but also a little bit a symbol of freedom. And here is our family’s message to Hongkongers: 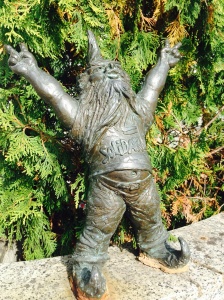 We, people of Poland, have been there. Fought for the same reason, suffered the same pain, shared the same dreams and hopes. Today we stand free, watching you fighting for your freedom. We can’t do much besides standing with tears in our eyes and praying for you. We hope and believe one day you will be able to stand free next to us, that you will achieve your goal without unnecessary harm or even worse. World is watching you, people all around the world are supporting you. It’s your time to add oil and shine. Let this little dwarfs, Solidarek, be a symbol that a new, good future is ahead of you – maybe not today, tomorrow or next month, but it will eventually come.
Stay safe and take care of yourselves.
T. family

I don’t think any political discussion is needed – if someone doesn’t want to support Hong Kong, doesn’t believe in their way of protesting etc. – I won’t force you to change your mind, neither you will change mine. Everyone has a sources and own conscious to judge the situation, in our family freedom is seen as one of the basic human rights and I could see tears in my mother’s eyes when she saw what’s going on in Hong Kong. That’s all about it.

I spent around half a day to catch them all, but I have failed. Actually when I think of it my map contained only 79 from more than 300 dwarfs, but what do you expect when you buy 6PLN map instead of 10PLN updated Dwarf Guidebook. I’m a cheapass, but hey – it’s also in English and German.
Even if I had more time I think it would be almost impossible to catch them all since one of those little assholes hides on a tram. Moving tram. I can only imagine myself walking from a tramstop to tramstop and looking at the tram side-numbers. But I took some nice pictures so let’s see what dwarfs you can surely meet on your way in the city center!

Disabled: Wheelchair Rider, Deaf and Blind – Market Square, next to the main entrance to the City Hall

Sleepy – św. Mikołaja St., at the back of the Jaś tenement

Dumpling Eater (my homie) – Kuźnicza St., next to the STP restaurant enterance

Gourmet (another foodie or just simply my own statue) – Market Square, in front of Pizza Hut 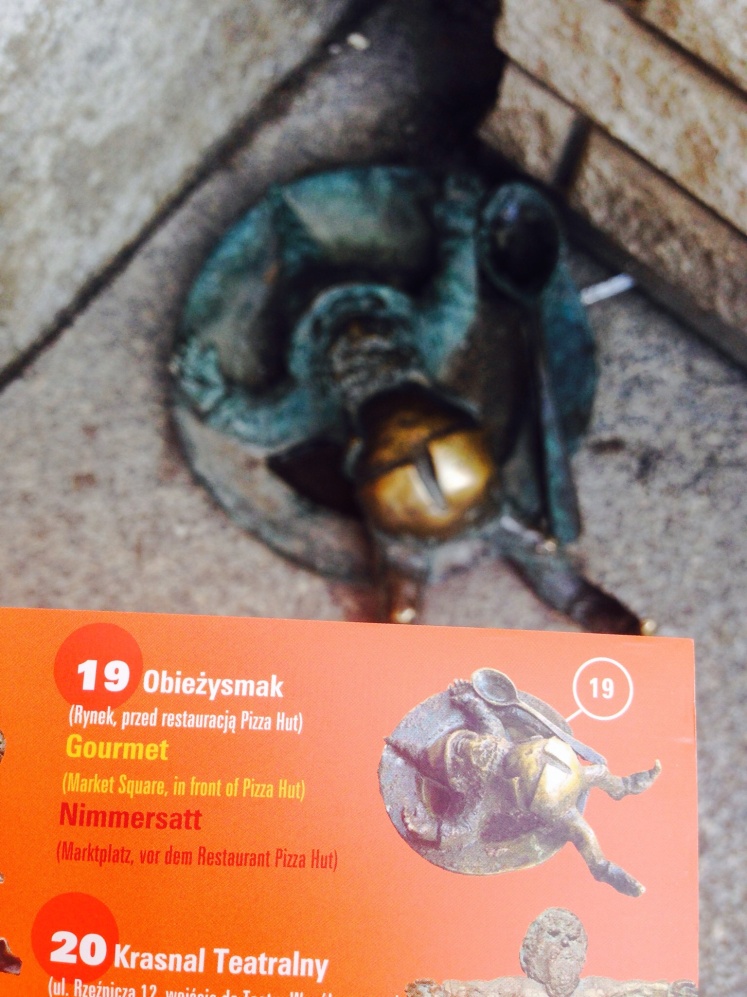 Film Lover – Kazimierza Wielkiego St., next to the Helios cinema 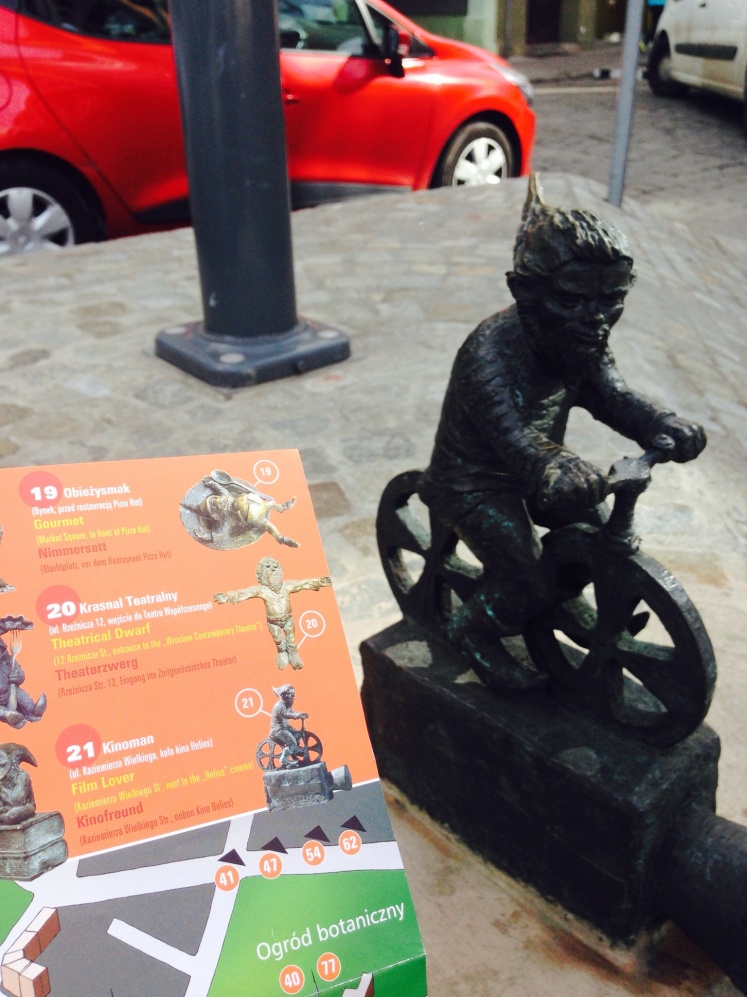 Friendly – so-called Pigeon Square, next to the fountain in the Market Square

WrocLover – between houses Hansel and Gretel, św. Mikołaja St. 1 – take a look that the heart he’s holding has Wrocław’s coat of arms! 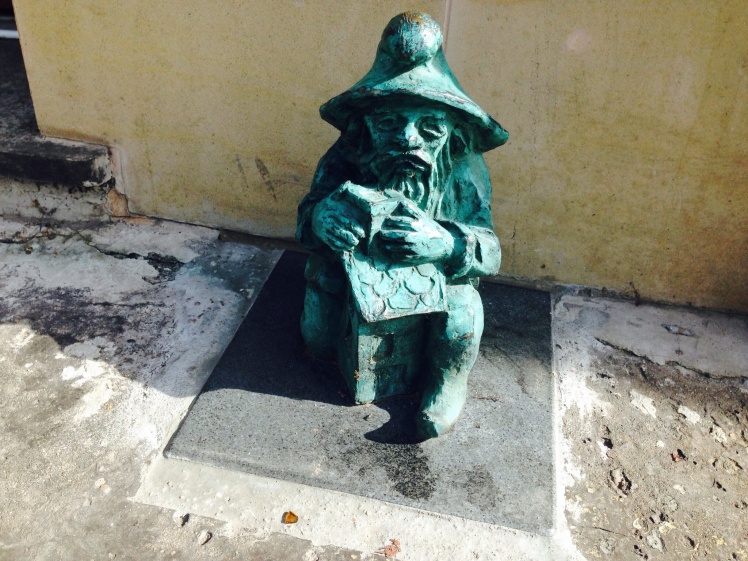