Probably most of the countries has its own version of phrase ‘Don’t judge a book by its cover‘, but in this case the beautiful outside hides very interesting and valuable story inside.

by Susan Blumberg-Kason tells the story of the author, how she moved to Hong Kong for her studies and where she met a man from Mainland China who was supposed to be the love of her life. Susan and Cai fall in love, get married but soon after things start to slowly fall apart. Even moving to the US and having a child doesn’t change the situation. First thinking it’s just all caused by ‘culture differences’ she tries to be a perfect Chinese wife and makes excuses for his behavior, complaints,  no support from his side, until one day she finds a strength to get out of that toxic relationship.

I’m not a professional writer neither even a native English speaker but I hope I can put my thoughts about this book here. I took it very personally for few reasons.

First of all for last couple of years I also tried to be a Good Chinese Wife, but just like Susan I almost lost the real me. She gave me strength to step up to my mother in law if I didn’t like her behavior.

Second thing is most of her story is settled in Hong Kong and San Francisco/Bay Area – places that for last few years been my home. When I read the book I pictured her story with the memory of those places I have today. I even once told my husband while driving through San Francisco ‘Susan used to live somewhere around here’.
Even more – Susan makes it even more personal by posting her old pictures on her personal page (click here) and Instagram (click here) so you can have a look on her infamous San Francisco’s house or her wedding venue in Hidden River. I read many books in my life but it’s the first time author let me be so close to her and let me see her world, not only leave me with words and imagination.

Third and most important thing is the book itself is in my opinion an eye-opener. For people who  think, just like Susan’s ex-father in law said ‘愛屋及烏 – Love my house, love the crow on it‘ which basically has a meaning like English proverb ‘Love me, love my dog’. If you don’t like something, don’t force yourself or try finding excuses but stand up for what you believe and want. Happy marriage is made from two happy people, not from one tip-toeing around hoping the other will be happy.
For those who cannot draw the line and hide behind ‘It’s just a cultural thing, it will be better in future’ – it might be, but the other person has to want the change. You cannot love for both of you.

Or for people like me, sometimes being ‘Cai’ – I used to complain to my husband how I dislike living here, but then I thought of my husband as Susan and me as Cai. Was he sharing the same feelings as her? Was I so heartless and I didn’t think enough of someone who supports me everyday?

It’s all possible because the story of her life is so well written. Despite of language barrier I didn’t have a problem not only reading her memoir, but I easily could feel her emotions. When she was happy, when she was worried, when she was scared, I could feel all those emotions inside. I read the book 3 times and each time I could feel the same thrill.

If I had to pick my favorite part of the book it would be… everything from the beginning to the end. But the part that is still stuck in my mind is when Susan decided she needs and she wants to make a change. You can read about a change from a sweet, young girl who did everything to make her husband happy, even if it meant giving up her own happiness, to a brave, self-confident and happy woman.

That’s why I cannot call her story as a ‘love story without happy-end’. She made huge changes in her life, grew up, set an example for women in similar situation, yet she still was able to give her son a normal, happy home. Not every woman can make it.

Who would I recommend it for? Everyone. For someone who wants to read a love story that is not another ‘Harlequin’ book and has a plot twist. For someone who wants a little bit of action. For those who wants to know more about interracial and intercultural relationship. For those who need some strength and encouragement to finally get out of a relationship that slowly kills. Or simply if you just want to read something interesting.
But maybe not for husbands: mine read it, loved it but now he’s using Cai as an excuse for situations like

Babe, I want chocolate
It’s 2 A.M., go to sleep
You’re a pig. I will never cook for you again. Tomorrow, at least.
Then read the book again and be thankful I’m not like that

But jokes aside – there’s everything for everyone in Susan’s memoir. I hope it will turn out to be a huge success because stories like her’s deserve it. Maybe in a year or two I will be able to re-read it again, this time in my own language.
Susan, 多謝你寫一本偉大的書, thank you for your great and inspirational book. I wish you lots of success. 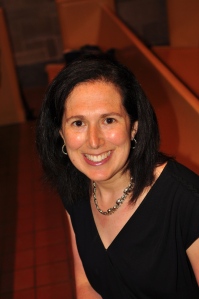 As for you, my dear Readers, you can win your own copy in giveaway organized by goodreads.com or order it online on:
Amazon
Barnes & Noble
Goodreads

About the author Susan Blumberg-Kason spent her childhood in suburban Chicago dreaming of the neon street signs and double-decker buses of Hong Kong. As soon as she was old enough, she moved there to study. Her memoir, Good Chinese Wife (Sourcebooks, 2014), recounts her years in a Chinese family as a wife, daughter-in-law, and mother.