I don’t usually write about that kind of topics, but one of my friends asked ‘Do you think Asian girls are extremely xenophilic?’. To give you a background for this question I introduce you the story of Cheap Agent 689 (7 in Cantonese slang sounds like penis so you can figure it out yourself; it’s also term used for CY Leung, Chief Executive of Hong Kong), David Bond.

That self-declared professional pick-up artist encourage his friend to ‘steal’ a local, strangely calm, guy’s date. Video went viral, Cheap Bond kept posting videos he made around Asia, including posting a video of him having sex with a Japanese girl on one of the porn sites. Classy, isn’t he? Real gentleman. You would think that now, since probably everyone who has Internet in East Asia saw the video and they will stay away from the Douchebag Gang, but they were spotted few days ago in Taiwan, surrounded by girls.
Now with the background information I can give you my answer. Or actually two.

If my opinion was based only on the opinions of men, with no personal experience, I would say: yes, they are. They might not say it out loud, but click on any Hong Kong/Chinese/Asian forum and you will find quite a lot of men being upset, they say it’s unfair to have different standards for a local man and a foreigner (check out this funny video that pretty much could sum up a lot of online posts, click here to see). Even some friends of mine complain quite a lot that is so hard for them to compete with foreigners. Technically we can talk about double standards for Asian men.

But isn’t it the same for Asian girls? It is less socially acceptable for women to date outside of their culture/ethnicity/nationality (choose whatever you want), than for men. I can relate it to myself and Poland, which still is quite conservative when it goes to dating someone from a different country. If you have a guy dating a foreign girl in most of the cases 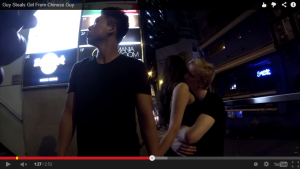 they will hear comments like ‘Great choice, exotic chick, you must be such a playboy’. Even in one of the shops in Guangzhou my husband heard shopping clerks talking to each other ‘That guy must be good to handle a ghost girl‘. If you flip the people and you have a girl dating a foreigner it has to be either for his money or his penis. I cannot count how many times I read about Asian girls liking ‘white sausages’ – I mean, if you try real Polish ‘biala kielbasa’ it’s just delicious ;), but the perception of WMAF seems to be really bad.  And as a girl in interracial relationship I read few comments about myself like ‘He must have bought you, you gold digger‘ or ‘So Polish guys are not good enough for you? Wanted some exotic fruits?‘ and of course my favorite ‘You are shame to Slavic race, thanks to you it will extinct’. Of course not everyone is like that, I can also read many comments that cheer me up by seeing how open-minded people can be, but still sadly majority of them is negative towards girls. And as much as I agree why Hongkongers got so upset with the Cheap Bond affair, even I got really, really frustrated because – we like it or not – it will have an impact on the opinion about Hong Kong girls. It’s quite sad to read those comments since I know how it feels. I mean seriously, you can’t find Sing on the world richest people list in Forbes and as far as I know he’s not a porn star, then using wallet-penis logic, why did I even marry him?

Now going to my personal experience: honestly speaking I don’t have many Asian female friends that I keep in touch with or I’m close with them, but if I make a statistic in 10 Asian female I know only 3 of them had/have non-Asian partner. The rest of them never even dated a foreigner and openly say they are only interested in ‘their own men’. I think 30% doesn’t really stand for ‘xenophilic’. To be even more honest I know more white girls dating foreigners than Asian girls. So should I change the question into are the Western girls xenophilic? More opened? You don’t really see that many complaints, they are somewhere up there, there are people making that kind of comments but still it’s less often than in case of Asian girls. 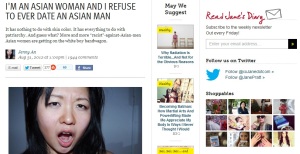 Conclusion: Some people like blondes, some people like redheads. Some people like Asians, other people like Latinos, some other Middle East. Some claim they wouldn’t date a chubbier girl, some girls claim they wouldn’t want a guy shorter than themselves. I would never date a guy younger than me – that’s my preference. And even with those perfectly normal preferences, which everyone has, people fall in love with those they wouldn’t expect to. Of course there will always be people of both genders who see dating a foreigner as an upgrade, nationality or race, but I personally find it stupid. Love is love, knows no gender or race, it just happens. It can hit you no matter if you’re rich or poor, white, black, Asian. You can love someone totally different from you aside of your perfect person image. It doesn’t bother me if someone dates an outsider, I just hate assholes like David Bond and his friend, I hope we won’t need to see guys like them anymore.
Dating is very intimate case and I think we should not judge someone’s preferences and choices, as long as they don’t hurt anyone. Looking at it in a more optimistic way: more Asian girls dating foreigners means more single Asian men for girls loving Asian men ;). Just let each other love.