Good Guy Greg, Scumbag Steve, Overly Attached Girlfriend, Annoying Facebook Girl and many more including my favorite First World Cat Problem – Internet is full of memes, I think anyone of you have seen them either on Facebook, on forums or anywhere else on the web.

Working on this blog makes me use the Internet much more than I wish to so I’m pretty aware of new trends online when it goes to memes, but for a really long time I had no idea that memes mine, 9GAG was actually founded by Hongkongers!

I also started to wonder: If 9GAG is based in Hong Kong how come there are literally no original Hong Kong memes?

Recently I spend a huge amount of time browsing sites like 環球膠報 and I could see many really good and hilarious memes Hongkongers can make. I think if their background wasn’t so connected to Hong Kong popculture and everyday life they could be next new trend! The memes Hongkongers use are much different than the one shown on pages like Hong Kong Memes where people use internationally known memes and adapt them to daily situations.

The memes I want to present you are my  favorite, you won’t find them on 9GAG or most English-written sites but they are so hilarious that I couldn’t resist to not write about them. If someone of you knows their background story better or know a better use of them, please don’t hesitate and tell us! Also you can use one of them as a respond to my post… Can you guess which one? 🙂

This is just one of the versions of a meme that includes an actor Kenneth Chan (陳啟泰) – he is an actor and a TV host that used to work for TVB and ATV – station also known as ‘The Throwing Bun Show’ as my husband says. That show brought an old lady a heart attack and was so unpopular even people sitting in the background left in the middle of filming the anniversary show. Ken Chan was the only really famous actor in ATV and probably they put him anywhere they could. People made fun of it putting his face everywhere on every movie poster. Various memes including his face mean that your team, government, opinion has one good point, but the rest just sucks. So if you agree with someone at one point but the rest is just a bullpoop you can proudly present him The Ken Chan. 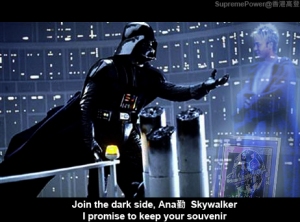 Another meme includes Hacken Lee (李克勤)– singer, actor, lyrics and God knows who else he can be. Story behind the meme starts in 2005 when Manchester United visited Hong Kong. Hacken, as a big fan, gave a frame consist of his CD covers, photos to the team on field. He said Sir Alex Ferguson promised that the gift would be placed in Manchester United Museum. At the end, reporters found the gift left in the changing room. To be honest I felt sad for him but apparently I’m not Hong Kong enough because my Hong Kong husband had tears in his eyes and he almost pulled his muscles laughing seeing all the GIFs and photoshopped pictures of Lee’s gift you can find online. It’s hard to explain how you use it so I’ll just show you by a simple example: ‘I got my girlfriend flowers but she didn’t like them’ and someone responds with a picture of Hecken and his frame. So I guess we can say if you complain that someone didn’t appreciate you, you can end up seeing Mr. Lee on your screen. Doesn’t matter it happened 9 years ago – this meme is still alive. 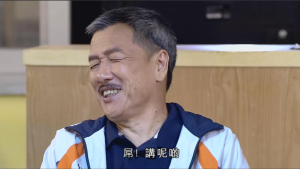 In my opinion one of the most popular memes you can find in Hong Kong. It doesn’t have such a story as the previous one but I think you can call it a Hong Kong version of Yao Ming and his ‘Bitch, please’ face. Lau Kong (劉江) said in one of TVB’s dramas he starred in ‘I know, that’s why I try not to make you mad’ but his face was just perfect for the meme now known as ‘Aya, you must be joking/not worth talking about‘ – it’s not a translation, but that’s how you usually use it. It doesn’t matter if the topic is good or bad, when you don’t want to continue it you post Lau’s picture with photoshopped subtitles. I hope some of Hongkongers can explain little bit more about the use of it since I’m not a native speaker.

‘Successfully achieved’ came from a banner that a member of  Democratic Alliance for the Betterment and Progress of Hong Kong (for people who are not aware of Hong Kong’s situation it’s as democratic as Democratic People’s Republic of Korea and called a shadow of Communist Party in Hong Kong) that said ‘Our party successfully achieved making green light for walking people 2 seconds longer’. Surely worth whole banner. Later it got photoshopped into ‘Our party successfully achieved catching 2 wild dogs on the street, putting ‘slow down’ sign and matching this and that celebrity. So if you show off with some with something that is not really worth the attention watch out – you can have your own banner.

Some of you might heard of an incident that happened few years ago in Hong Kong – man was found with his penis stuck in a metal bench… If no then just google ‘Man humping a bench Hong Kong‘ and you surely will find a lot of result. Some people say it’s just a bad date with weird preferences, other say it was a revenge – he owed money to mafia so they made him put his penis inside a whole in the bench and gave him a medicine so he couldn’t get out. Guy himself claims he was doing sport and accidentally he slipped in. Maybe he should stop running with his underwear down so he won’t trip and fall right in the hole.
No matter what was the real reason he looked stupid. I feel sorry for him, but tell me – who of you didn’t have that tiny smile on your face thinking about a guy stuck while being intimate with a bench. So whenever someone says or does something dumb you can post this meme.
BTW. Did you noticed a crossover with Hanson and his frame?

Honestly I have no idea what drama brought this meme to life but I cannot stop laughing seeing this face. Actress in one of the dramas is so terrible, she’s like Kristen Stewart of Asia. No matter what drama, she cries the same way and in this one she had the same face expression… like a stone showing up there as well! Some people claim she looks like 囧 which is also used as a meme ‘Do not want’. This one is slightly different – whenever you want to explain something to someone that picture is the right one to send. It has no special meaning beside ‘Let me explain it to you’ , no big connection to the drama but it can make anyone laugh!

Li Ka-shing (李嘉誠爵士) is a Hong Kong’s most wealthiest man, he got money from sales, retails, real estate, technology, ports and many other things. Pretty good for someone who dropped out from school. Long story short: he own really a lot of places, businesses etc., so every hour when people don’t work is a waste for him. In Hong Kong summer time is a typhoon time. Strong typhoon means no work. No work, no money for Li. So as a joke people claim the existence of an artificial force shield over Hong Kong that prevents tropical cyclones from approaching the city during weekdays. It is implied that the field is invented and funded by Li. To make things worse there was a period of time when a typhoon 8 was not announced for more than 3 years. And then I went to Hong Kong – BAM, typhoon 10. Maybe I should get my own meme?
You will see bunch of Li’s shield online after strong typhoons. If you still don’t believe that man’s power check some of typhoons that couldn’t resist it: Lekima, Rosa, Parma, Super Typhoon Megi. 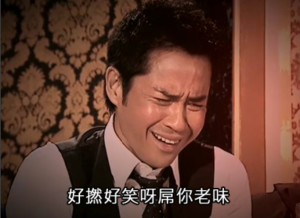 Last, but not the least. Very simple, very often used. Maybe some of you will start using it to your friends!
It came from another best acting scene – can you guess is the guy in the picture laughing or crying?
It’s so bad that people changed the subtitle into ‘So funny‘. Same case as the guy’s acting – you can use it when you find something that is funny for real or when you’re ironic. No one can tell from his bad acting anyway.

PS. He was crying.

What is your favorite (not only Hong Kong) meme? Have you seen any of them before? How popular are memes in your country? Share your experience!