Many of you probably have already seen a video where Hong Kong girl accusses guy of cheating, then keep on slapping him. And at least in my country, beside making fun of his surname 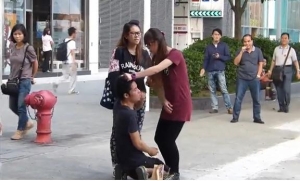 which sounds really bad in my language – thought where this guy has his balls? Well, big chance in a purse he bought for her. But let`s put jokes aside.

I don`t know if it`s Chinese way of parenting that provides and helps child everything, `saving-face-issues` or what but Hong Kong or Chinese girls in general are known for having a princess sickness.

Of course let`s be fair, there are princess in every country and for every royal girl there is her royal king. They just cannot be together because they would probably kill each other to get what they want. I know a Princess myself, we like to call her Sushi-girl. She was a normal girl before she started dating him. He gave her everything she asked for, later asking for more and more. Not really giving anything in return beside argues that whole building could hear. You could say it was very intensive high school relationship. He drive her with his expensive car, let her live with him instead of her mom in a poor area. Once she asked him for sushi, he brought her one. She took a bite and throw everything to the garbage saying she doesn`t like it and he does not love her anymore `since he brought her that shit`. Recently I talked to my friends and they are not together anymore.

Or a Korean girl I saw video of – guy carried her on her back to the toilet, picked her nose, brushed her hair and teeth. Prepare breakfast, feed her, carry to the car, later pick up. She was perfectly healthy, just didn`t want to do that. To make it more funny guy said he actually enjoys those things, beside waxing her.

But why I reffer to Chinese/HK girls? Maybe because of the videos I want to present you. Sushi girl and lazy-Korean are like a teddy bears to those beasts. You know that time when you`re on your PMS and your man throws chocolate on you and run away hoping you can`t catch him? Comparing to some princesses me on my `haunt for the red october`is like a dream come true.
I`ve seen too many argues, pictures where girls disrespect their guys and those girls destroy other girls`s opinion. I know that 90% of them are not like that, but 10% is enough to make other people talk bad about all of the girls, just check any Chinese  forum what guys think of those girls.

To show you planet-terror I`m talking about I have picked few of most popular princess-videos, to show you what I mean by beasts. I tried to translate them, general meaning is the same but some of the things could be translated differently. After seing them you will know what I mean, you can see all of the emotions – first it`s usually sad face and cry, if that doesn`t work they use scream (sometimes it`s the other way, first they scream, later make a puppy face to ask for the thing) to end up blackamailing about suicide. And later princess becomes a drama-queen.

She slams the menu on the ground and go away. This one is `the softie`

This girl really wants her shark fin. Keep yelling, laying on the ground, blaming her boyfriend for doing that. Some people say the video is fake, a commercial to save sharks, but what I`ve heard from my friends was that even if the video is fake that kind of behavior is very common – behaving like a child, yelling, crying to get something.

Some girls ask for a purse or neckless. Car shouldn`t be a problem, in the end she`s not asking about ferrari…

And our little girl is throwing his stuff away. I like one of the comments under the video: so many girls, why this one?

If you noticed at the very end there`s a guy showing his thumbs up and saying `Good job, well said`.

I left this one at the very end, it`s little bit long, little bit hmm… violent? But it perfectly shows most common method of getting what princess wants: yell, cry, blackmail. Couple were looking for flat in Shanghai, 3 small rooms for 1.55 mln RMB.

In meantime someone tries to calm them down and say he can pay 60%, she can pay 40%. In the end `son of a bitch` still carries her purse and probably buys that flat. Mission accomplished.

What I`ve tried to say by this post? My message – guys, get some balls and dump that kind of girls. They don`t really love you. If you love someone you respect them, this type of girl only loves herself. And maybe money. But mostly herself.  guys, you are smart, handsome, why do you waste time to be someone`s tool? So many good girls in this world, have some respect towards yourself and don`t let her treat you this way. If you even decide to handle her show her she cannot push you around. That really breaks my heart when I see those poor guys threaten. Some of them will really say `no` but most of them will keep on being nice and doing what she wants. She will never respect you, if you cannot stand up for yourself. Please, think about my words.

And girls – please, keep on showing the world that you`re not that kind of a girl, most of you are not and don`t let spoiled little brats destroy opinion about you. You`re great.

How about you? Do you know any prince or a princess? What do you think about that kind of behavior? Could you stand it for the one you love? Share your opinion!
https://www.facebook.com/myhongkonghusband

87 thoughts on “公主病 – on princess syndrome and tough relationships”