Being Polish-Chinese wife in America can be really tough, especially when it goes to food. Besides Carl’s Jr Famous Burger there’s nothing much I like, everything else is either tasteless or has too much of everything. And I’m sometimes sick of Chinese food as well, even thought it’s delicious but it’s not the food I was rised with and I don’t feel like eating it everyday.

My husband and his mother had an argument last year: which country had the best food?

He: I like Chinese food, Thai is OK, some of Polish food is even better than Chinese.
She: You say you like European food because you love her, not because you really like it. Look at China – we have all kinds of veggies, meat, fruits and spices you cannot find there. Chinese food is the best.

Then she went to Poland and actually really liked some of our traditional food. Sometimes the texture wasn’t her favourite one but the taste was very similar to what she tried before in Asia, just made from different ingredients. From time to time I will make posts like this trying to bring a little bit of my culture into this blog.

Why I start with bigos? It was the first traditional food I’ve ever made on my own, long time before I left the country, you can even see a picture of my first bigos. I was so proud I had to take a photo. And it’s also food I’m missing the most – my childhood Christmas memory when in a cold day I was walking back home from school and the whole street was smelling like cat farts.

Yup, that’s how you knew that Christmas is coming. It doesn’t smell nice while making but the taste is quite unique. It also appears in national epic poem. I mean, how good it has to be to become a part of poem. That’s a real foodie.

In the pots warmed the bigos; mere words cannot tell
Of its wondrous taste, colour and marvellous smell (…)
Is bigos, made from legumes, best grown in the earth;
Pickled cabbage comes foremost, and properly chopped,
Which itself, is the saying, will in ones mouth hop;
In the boiler enclosed, with its moist bosom shields
Choicest morsels of meat raised on greenest of fields;
Then it simmers, till fire has extracted each drop
Of live juice, and the liquid boils over the top,
And the heady aroma wafts gently afar.

It’s almost like a recipe itself, but I want to introduce you my mom’s recipe. Asian man all over the world, if your loved one is from Center/Eastern Europe she probably knows the taste of bigos, you can make her a surprise by cooking it on your own! 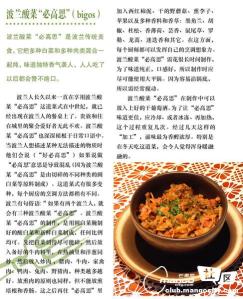 What you need to make a bigos 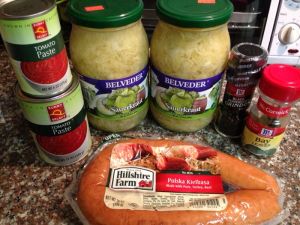 I have to warn you it will take a while to make it. Believe me or not but that’s probably one of few dishes in the world that more you cook it/heat it up tastier it gets. Proper bigos should be cooked at least for 3 days, everyday for few hour with a small fire.

Put your sauerkraut in a pot, you can rinse it with water before doing it, but sauerkraut in America is not as sour as Polish one so I just put a whole thing into the pot and cover with water. Heat it on a small fire for 1.5h hour. After that time add bay leaves, allspice and a bit of pepper. Put dried mushrooms in the water. After 1.5h slice mushrooms, cut the sausage. Fry sausage on a spoon of olive oil with freshly ground pepper until it gets brown. Then put it all together including oil you used to fry to the sauerkraut.

Before I mentioned to avoid ‘Polish sausage’. Why? Because it’s not even close with the taste to kielbasa. It’s just like a giant sodium-wiener. It’s also a reason why I won’t let my husband go shopping alone ever again. It’s just awful, I’m not sensitive to smell but when I’ve opened the package it made me want to vomit. Literally. Look at the difference in ammount of sodium, color, inside and skin outside. It’s totally different. ‘Polska kielbasa’ is the closest you can get in a regular shop, so just remember to not buy that crap.

Do it for next 2-3 hours, then add tomato sauce and a spoon of mustard. It will give a color and tiny bit of bitter taste to your delicious bigos.  No extra spices are needed, most of the taste comes from meat and sauerkraute with a little bit of mushroom. Kee

p in your mind more time you reheat it, it will only get better and better. For me, I cannot wait and want to eat it right when it’s made!

First one in more Russian than Polish but you can find many Polish products. The second one is completly Polish, I even spoke to the owner in our mother language which was really nice for me. Gives you great quality meat, you can buy there already prepared Polish food like bigos, gołąbki, pierogi, white sausage which goes really well with bigos. I got 10 pieces for 14 USD, still got 2 I’ve saved for this awesome meal.

Beside white sausage it’s served either inside a bread or with a bread next to it. I love to put it on a fresh European-style bread. 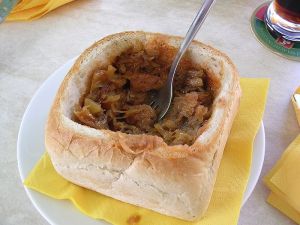 Would you like to try it? Maybe you’ve tried something similar in your life? Tell me about your childhood taste-memories! 🙂
https://www.facebook.com/myhongkonghusband