Breaking news! Lina and her husband are going to be  an aunt and uncle! My husband’s cousin’s wife is pregnant – the best grandchild, one and only son of a son now oficially made another generation of little human(s). It’s still to early to kno

w the gender of a child or maybe even children, but I’m already getting crazy! My husband’s reaction? ‘Nah, it’s not ours beside we won’t see it much’. Best. Uncle. Ever.

Because of that for last few days I keep walking around and telling everyone how great aunt I will be. And here there’s Best. Uncle. Ever. part again when he crushes my dream saying that I can only be an ‘outside aunt’ and that’s the best case. I end up as 表姨. Wait, why? Because we don’t share a surname with them. OK… then what’s with our sister when she gets married, will she stay an ‘inside aunt’ because of the surname? No, when she gets married even thought she doesn’t change the surname she is already given to another family and that makes her an outise aunt. Too bad he couldn’t answer ‘What if she doesn’t get married at all’.

After that I kept asking him like a child fifty thousand times ‘Why? But why? And why that?’ so he introduced me to all the titles I should know about our closest family a.k.a. family members I’ve met before. And who am I for them. Honestly, I got so happy I haven’t met a whole family, all those aunts and uncles and their children because I would run away screaming. It’s much more simple in western society just add a name after ‘aunt’, ‘uncle’ or ‘cousin’. If it’s your or younger generation it might be acceptable to use a name or a childhood nickname but saying ‘uncle Wing’ might be as disrespectful as ‘come and eat old bastard’. OK, maybe I’m overreacting a bit but it’s really confusing! Beside being polite they think if you don’t use term describing ‘outside uncle of the 3 elder brother’ no one will know who you talk about. What’s the point of having a name? Argh.

So let’s take a look on my family-challenge. 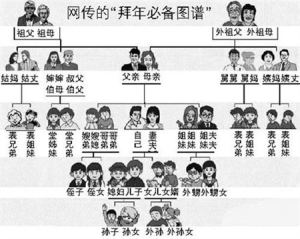 My mother in law has two older siblings. First one and the oldest one is to him we are 外甥 – sister’s son and 外甥媳婦 sister’s son’s wife. For my husband he is 舅父 mother’s brother no matter if he’s older or younder. If she had more than one brother you add numbers or make is as big brother, 2nd brother, 3rd brother, small brother. It works with every tittle when you have more than 1 sibling. Bless one child policy now. He has a wife, not just an aunt, it’s 舅姆 – mother’s brother’s wife. In this probably some of you were as naive as me thinking we have same relationship to her as to his uncle. NOPE. Why? Because female is a speaker. To her we become 姨甥 and 姨甥媳婦. They also have a son, mentioned before as a future daddy. My husband is his father’s sister’s son who is younger than him so he can be called 表弟 and he can call me 表嫂. For us he’s 表兄, his wife is our 表嫂.

My mother’s older sister is our 姨母 and her husband 姨夫. They can use the same term for us that is used by her brother and his family. Lucky they have only one son – 表兄弟. Don’t forget about the grandparents. For my husband they are ‘outside grandparents’ because they don’t share one surname, as son of a daughter – grandfather 外父 and grandmother 外婆 so in return we are 外孫 – daughter’s son and his wife – 外孫媳婦, daughter’s son’s wife.

Uff, let’s stay with the family members I met. My husband’s father is one of the 5 children, every one of them has at least another 2 children… Imagine that family meeting. I think I will keep using the nicknames we gave to them: little chick (my husband’s sister), big cousin (son of a son), handsome cousin (other cousin, son of a daughter) or big mama (mother’s-in-law sister).

If you want to get more information about all the family title’s that work in Chinese culture check this site out http://www.kwanfamily.info/culture/familytitles_table.php or watch a hilarious video made by ‘Off the Great Wall’ and I think I got their picture in the top of this post. Anyway that’s the movie: http://www.youtube.com/watch?v=nCFRoILS1jY&noredirect=1 – The Complicated Chinese Family Tree.

After all I’m so happy I can call my part of the family with their names not get confused by all the crazy titles. I hope I didn’t mess up too much with Cantonese and Mandarin but it was just too hard for me to find all of those complicated relationship titles. Do you have titles in your country? Or if you’re Chinese – which one of them are yours? Do you like them? Share your experience! 🙂